Want to keep track of our work? Sign up for PoP BC updates, actions, public health information, and announcements.

Unlike BC, Ontario and Quebec have kept masks on public transportation until mid-April.

On March 24th, Protect our Province BC accepted the invitation of one of our followers, Daryl Dela Cruz to join in on the presentation at the TransLink Open Board meeting.

“Why is smoking now permitted on public transit?” asked Dr. Filiatrault, a retired Emergency Physician and POP BC member.

She equated the lifting of mask requirement during an ongoing pandemic as effectively allowing people to smoke, except what is coming out of mouths is not cigarette smoke but a contagious virus that as of March 24th, had already infected over 354,000 British Columbians, disabled countless others through Long Covid and so far had killed 2,975 loved ones.

Despite our collective wish that this pandemic be over.

COVID is not yet done with us.

In BC, the BA.2 sub-variant is now dominant, making up the majority of new cases.

It is about 30% more contagious than Omicron.

We can all see what is now happening in Australia, China, Hong Kong and in many European countries along with the UK: COVID-19 cases and hospitalizations are again rising.

It is easy to predict what will soon be happening here.

Crowded buses and trains create the perfect conditions (3 Cs: Close Contact, Crowded and Closed Settings) for spread. We are now adding to this mix a much more contagious sub-variant while at the same time removing mask requirements.

What exactly do we expect will happen here?

Answer: On March 28, BC’s own wastewater data showed an increase in SARS-CoV-2 concentrations at three out of five lower mainland treatment plants. Meanwhile admissions have already started trending up in two health authorities.

This follows both Quebec and Ontario where a sixth wave has taken hold with a rise in Omicron sub-variant BA.2 cases and hospitalizations after the rapid lifting of most health protection measures and many residents taking this as a signal to throw caution to the wind. 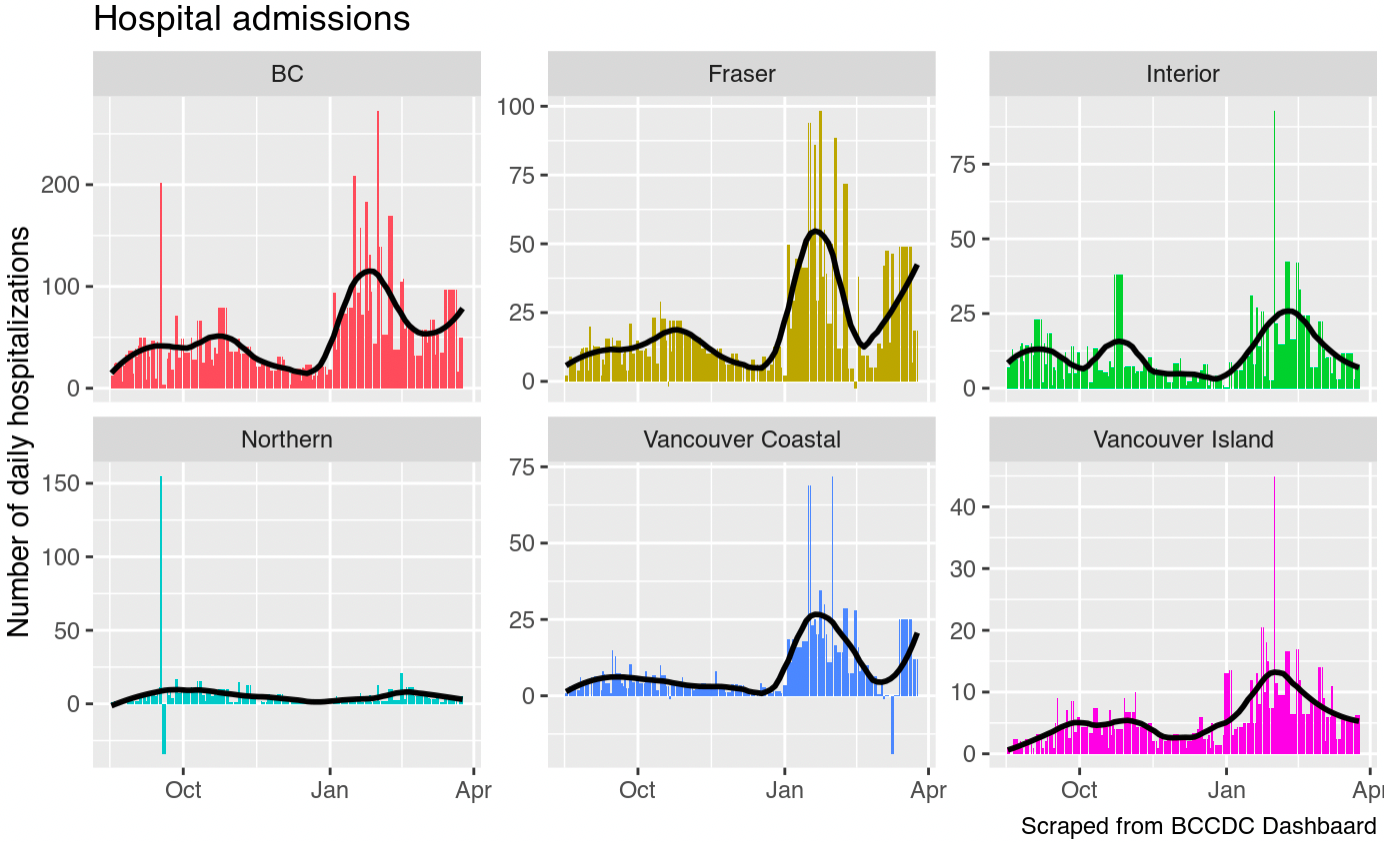 Joy Russell, a concerned TransLink user, also presented at the TransLink Open Board meeting and spoke of her own situation as someone who depends on public transit. Without universal and mandatory masking in shared indoor spaces, masking becomes less effective and puts the health of riders, like Joy, at risk.

She also pointed out that the most vulnerable in our society rely on public transport. This group includes the elderly, students and many racialized minorities as well as people with disabilities and those who are immune compromised or, who live and care for anyone who is more vulnerable to COVID-19. For them, like many essential workers, driving is not an option nor is working from home.

She politely refrained from contrasting this situation with the Board members’ who were meeting virtually.

As SFU Professor June Francis highlighted the removal of mask mandate on public transportation constitutes “adverse impact discrimination” against Black, Indigenous and People of Color. This group relies heavily on public transit while at the same time more commonly suffers from the chronic health diseases that place them at higher risk for severe COVID-19.

On March 16, the BC Human Rights Commissioner, Kasari Govender sent a letter to the BC Public Health Officer where she herself stated that

“Given the benefits of the mask mandate for thousands of marginalised people and the minimal impact on those being asked to wear one, the balance at this time favours continuing the mask mandate.”

The Human Rights Commissioner defined marginalised groups as “immunocompromised people, older people, Indigenous and racialized peoples, people with disabilities, and low-income communities”. She also mentioned children under 5 who cannot be vaccinated yet. Altogether, the marginalised are a large group that is put at further risk, many of whom use public transit, attend public schools, work in high-risk jobs, or have family members that do.

In addition to reinstating mandatory masking, Protect Our Province BC asked TransLink to start cleaning the air that riders share and re-breathe.

This can be accomplished by first measuring the air quality on buses and trains and secondly adding air filtration to the existing ventilation strategy.

Though TransLink would have us believe that ventilation on buses and skytrains is great, it must back that claim with evidence: CO2 readings of 800 ppm or less. Based on Daryl Dela Cruz’s twitter post  skytrain ventilation may not hold up when riders are shoulder to shoulder and the same may well be true on buses. 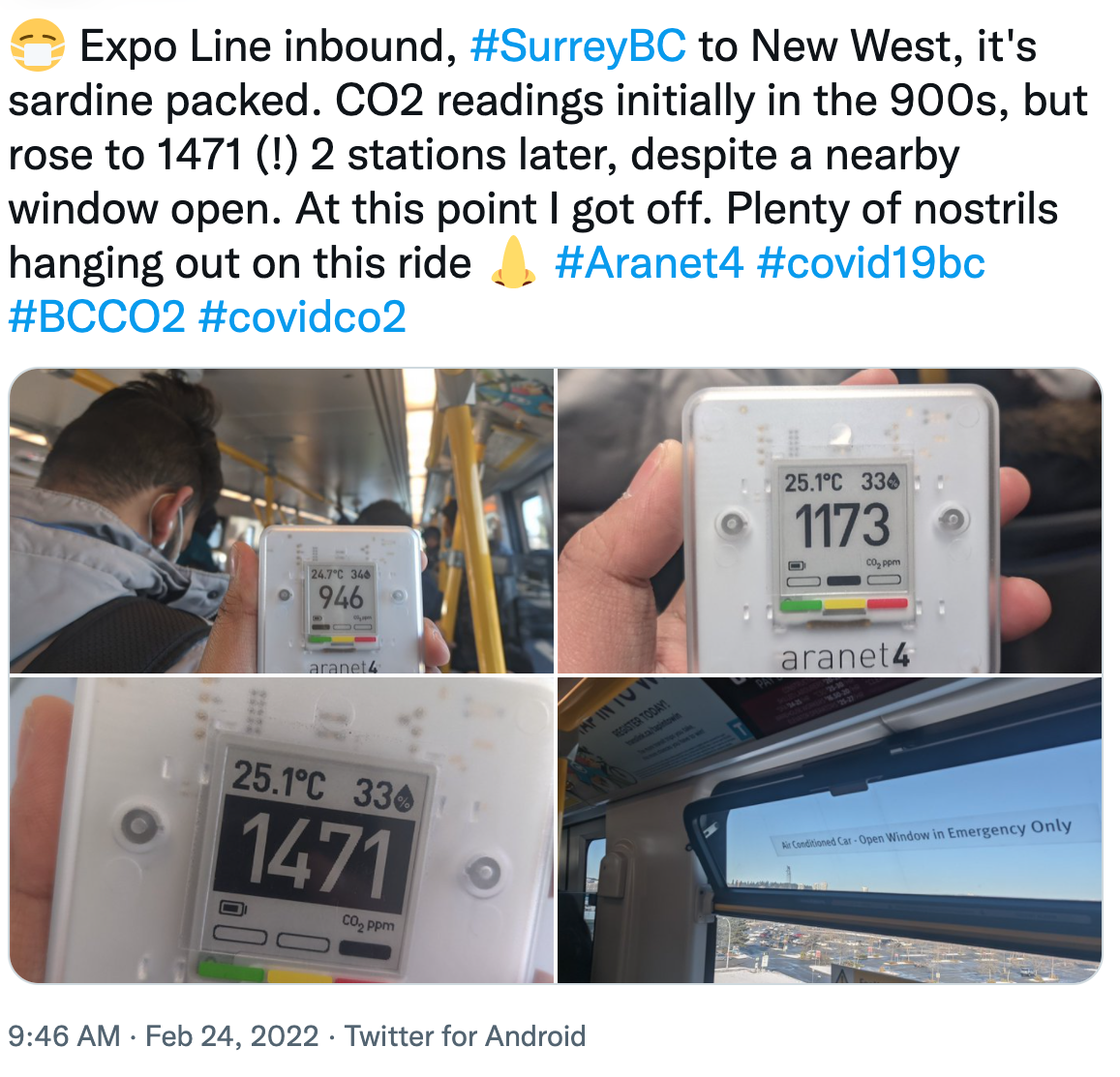 BC should take its cue from high performing countries such as Taiwan where HEPA filtration units have been added on buses and masking remains mandatory on public transit. 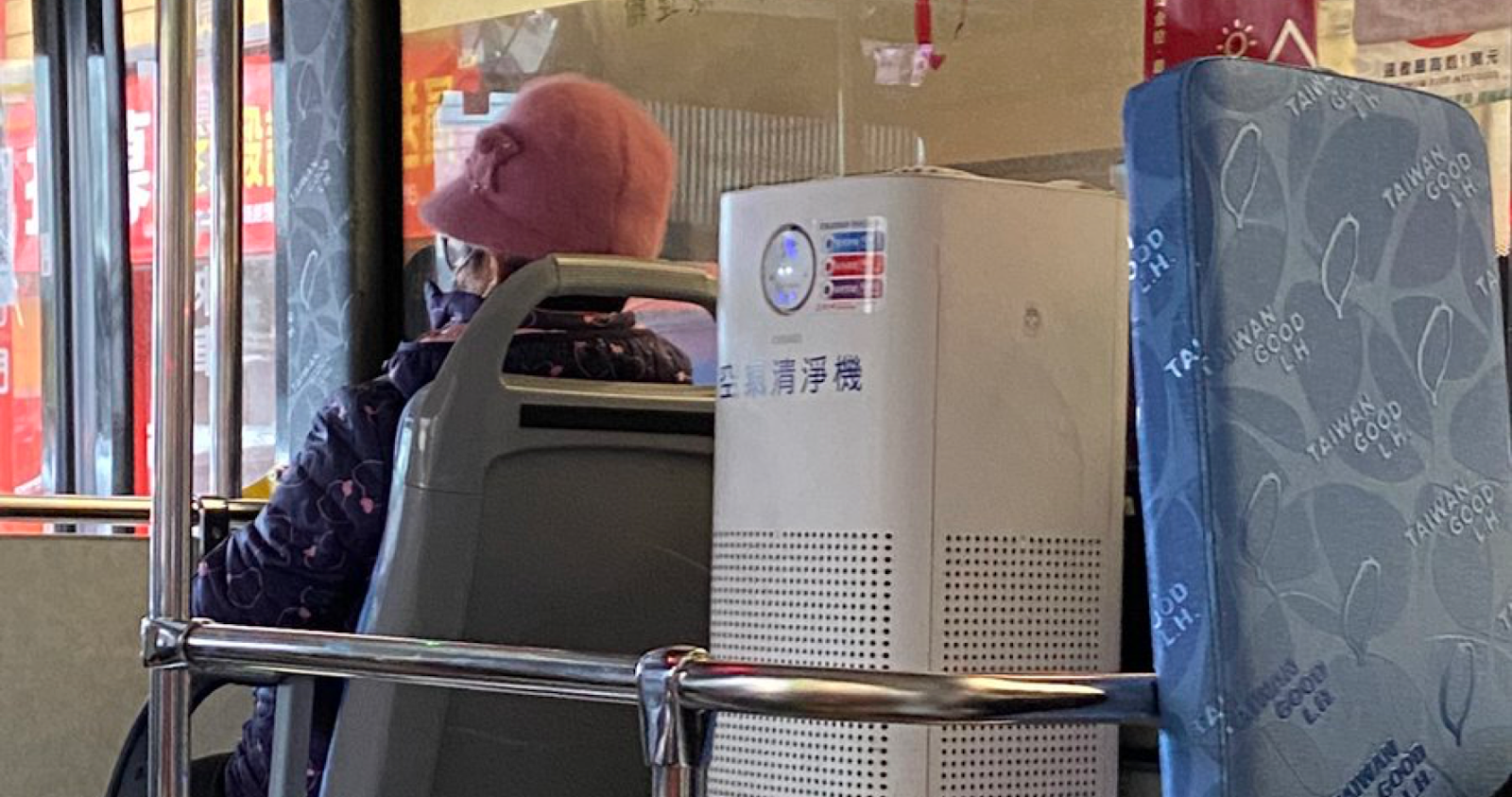 TransLink CEO Kevin Quinn says “Our customers are at the heart of everything we do.”

We say: prove it. Take the following three actions:

Only then will TransLink be moving closer to meeting its customer promise and living its value of operating “safely at all times.”

When commuters feel SAFE, ridership will recover to pre-pandemic level.

Please join us in signing Darryl Dela Cruz’s public petition asking for mandatory masking to be reinstated on public transit in BC.

Archived Briefings from Protect Our Province BC

COVID-19 in the House: How to Protect Your Loved Ones
Wednesday, April 27th from 12:00-1:00 PDT What should you do if someone in your house tests positive for COVID-19? How do we prevent it from passing to loved ones in the household? Why should we care? Data is emerging that, due to variant mutations, COVID-19 reinfections are happening, even in highly-vaccinated countries. For that reason,… END_OF_DOCUMENT_TOKEN_TO_BE_REPLACED
READ MORE
COVID-19 Doesn’t Take Breaks. Neither Can We.
Thursday, April 7 at 12:00 noon PDT Ignoring the 6th wave won’t stop it. What does the evidence say? Join Dr. Lyne Filiatrault, Dr. Brenda Hardie, and Gosia Gasperowicz, PhD, as they discuss what BC needs to do to lower community transmission as the most infectious strain of COVID ever becomes dominant across the globe.… END_OF_DOCUMENT_TOKEN_TO_BE_REPLACED
READ MORE
Lack of Ethics: How Canada is Failing with COVID-19
Wednesday, March 23rd, 12:30-1:30 pm PT Join Canadian researcher and author Jon Parsons in a discussion with Protect our Province BC member Dr. Amy Tan about how Canada’s response to the COVID-19 pandemic amounts to a failure of ethical action.  The pandemic has brought issues with Canada’s governing systems and cultural identity into full view:… END_OF_DOCUMENT_TOKEN_TO_BE_REPLACED
READ MORE
SEE ALL ARCHIVED POP BC BRIEFINGS

More News from Protect Our Province BC

Protect Our Province BC, Safe Schools Coalition BC and BC School COVID Tracker Issue Joint Press Release
Protect Our Province BC, Safe Schools Coalition BC and BC School COVID Tracker are coming together to ask for mask protection in indoor public spaces, businesses, schools and on public transit in BC. The removal of BC’s mandated health protections has us concerned for the health and well-being of all British Columbians. “Now that masking… END_OF_DOCUMENT_TOKEN_TO_BE_REPLACED
READ MORE
Transit Users Ask Translink to Keep Mask Protections in Place.
On March 11th, the British Columbia Public Health Officer, Dr. Bonnie Henry lifted the indoor mask mandate for most public places, with the main exception being healthcare settings.  TransLink immediately followed suit and lifted its own mask requirement, leaving commuters on  buses and trains with very few COVID-19 precautions. Unlike BC, Ontario and Quebec have… END_OF_DOCUMENT_TOKEN_TO_BE_REPLACED
READ MORE
N95 Masks & the Transmission of COVID-19
Share this: April 2, 2022  A Guest Post by Tim Henthorne, B.A.Sc., P. Eng Over the past two years, we have been flooded with opinions regarding the wearing of masks, all while trying to learn how to deal with the existential threat of COVID-19. Unfortunately, much confusion has come from Public Health itself with its… END_OF_DOCUMENT_TOKEN_TO_BE_REPLACED
READ MORE
SEE ALL ARCHIVED POP BC NEWS